Airport Guard who could not even afford lunch, returns half a million worth of cash found

Airport Guard who could not even afford lunch, returns half a million worth of cash found.   Times nowadays would present us challenges 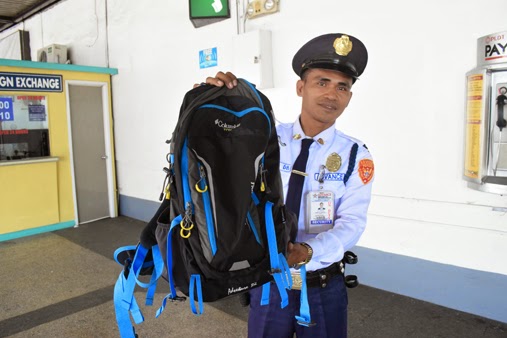 Airport Guard who could not even afford lunch, returns half a million worth of cash found.

Times nowadays would present us challenges to define and test our own integrity. People may react differently when faced with such challenges. There are those who can feel guilt-free and stomach doing unfair things to others. Fortunately, there are still people who have high integrity and morals to live honestly even when they are themselves are in a bind.

One particular Airport Guard in NAIA had done a great job in returning a bag full of cash worth half a million pesos. Despite having financial struggles himself, he chose to do the right thing. 36-year old Damian Namion of Advance Forces Security spotted a bag left on a baggage cart.

He immediately called Philippine National Police Aviation Security as part of the standard operation procedure whenever a bag was left behind unattended on the airport. When there was no explosive substance found, Namion directly went to airport police’s lost and found to help identifying the owner so it could be returned. Upon checking the contents of the bag, various gadgets and valuable documents were found but the staggering amount of $10,700 (P.5 million) left untouched was what made this man a hero. His superiors had awarded him an accolade and due merit for his honest service.

Airport authorities had conducted an investigation and the bag’s owner was an OFW (Overseas Filipino Worker), Jessie Amor, who was an engineer based in Malaysia. The owner was deeply thankful for Namion and tipped him off with $300. Namion did not keep the $300 for himself and proceeded to share the $200 with his friends and colleagues.

Apparently, Namion had just borrowed P100 from a co-worker to that day to afford himself a decent lunch. He only earns a meager amount of P12,000 monthly to support his two children and his wife. Nonetheless, his honest act served as an inspiration to his peers, colleagues and to others.