It makes the perfect solution for presenting jobs to his colleagues and encouraging safety consumer-merchant transactions during the pandemic. It is honestly commendable, but when Dantes himself was spotted to be delivering parcels one day, it left one star struck James Deakin on its wake.

Dantes is known to be a motorcycle enthusiast, and it is no wonder he used his BMW R1250 GS to deliver the package. James Deakin posted a photo of Dantes in uniform and on the road wearing the colors of his brand. He captioned the photo with, “Spotted! Is that THE Ding Dong Dantes delivering personally??? Btw, nice bike!!!! Not sure which one I’m more starstruck with. Good job bro!”

Much like Deakin, netizens were surprised to find out that Dantes himself was delivering packages. Fans and netizens were applauding the actor for taking the time to deliver, and yet some feels like it’s some kind of a marketing strategy. Who else is better to advertise the brand than him? 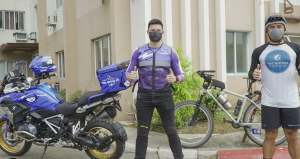 On the other hand, extensive training for safety on the road, sanitary handling and disaster preparedness were taught to riders who were from the showbiz industry.

Their app was still in the works but they had announced they will be launching it soon. For now, partner riders and businesses who are interested can apply in their website.