“SHE SAVED OUR LIVES” Passenger shares how a lady pilot lands the plane safely after a turbulence flight.

“SHE SAVED OUR LIVES” Passenger shares how a lady pilot lands the plane safely after a turbulence flight. Passenger who felt like she’s been gr 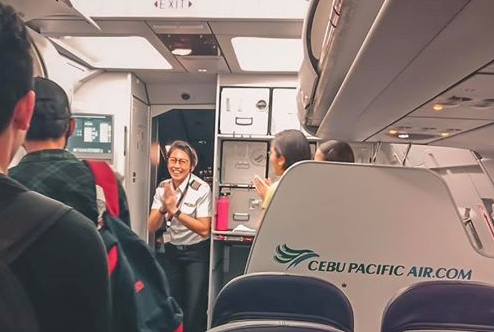 “SHE SAVED OUR LIVES” Passenger shares how a lady pilot lands the plane safely after a turbulence flight.

Passenger who felt like she’s been granted a second life after flying along turbulent skies, shares how a lady pilot expertly lands a plane, saving their lives. It is safe to say that everyone who chooses to fly rather than travel by land, are not afraid of planes. Nevertheless, there are times that weather conditions just do not forgive, and that’s one scary thing when you’re 5,000 ft above.

Kemberly Pasinag Victorioso pretty much felt like it’s her second life after a massive turbulence shook their plane along the way. She was on vacation with friends as they travel around Iloilo and was returning home via Cebu Pacific flight 5J 721. Still giddy after their one-week retreat, she did not expect that a scare of the lifetime would dampen her joyous trip.

Heavy rain made turbulent skies that sent shocks through their plane. She recalled how passengers were screaming in panic, everyone thinking the same thing. Could it be the end?

Minutes after, the plane landed safely and passengers were able to breathe a sigh of relief. They all expressed their deepest gratitude to the lady pilot and their first officer who expertly maneuvered the plane out of danger.

In a facebook post, Victorioso recalled her experience and gave the lady pilot and her co-pilot a deserving title of ‘heroes’. She wrote, “We express our deepest gratitude to the PILOT – who is in command, to our LADY PILOT OF CEBU PACIFIC JACQUELINE CHUA OF FLIGHT 5J 721! Together with our First Officer, FO VER JOSEPH POBLETE, who is in control, You’re a hero! You saved all of us.”

Victorioso also shared that the lady pilot reciprocated their gratitude and said – in her dedication of service, “For all of you, a safe flight always.” She also gave thanks to the Lord for she quietly prayed to keep them all safe.