Barista received $100,000 (P5Million), after being posted online by a customer who won’t wear a face mask.

Barista received $100,000 (P5Million), after being posted online by a customer who won’t wear a face mask. A Barista who denied service to a cu 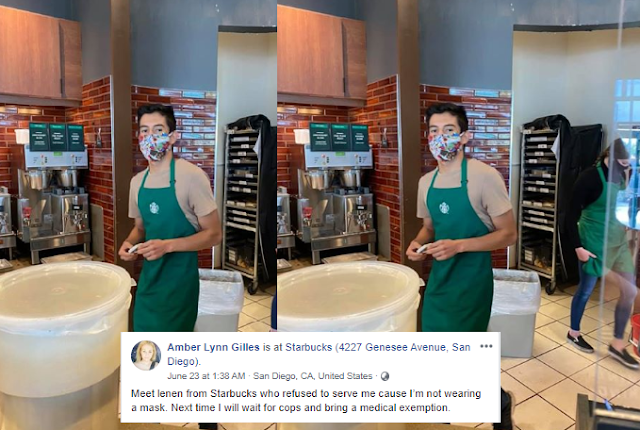 Barista received $100,000 (P5Million), after being posted online by a customer who won’t wear a face mask.

A Barista who denied service to a customer who won’t wear a facemask went viral after said customer posted about it on her social media. Little did she know that her intention to criticize him, completely flipped around and instead resulted into something wonderful.

Coming from a poor family, Lenin Gutierrez, had to work during the pandemic to help his family with the expenses. He’s a 24-year old college student working at a Starbucks in Clairemont. One day a customer came without wearing a facemask, but Lenin who was only following the rules, pointed out the coronavirus safety protocols. She left after taking a photo of him and proceeded to post the incident on Facebook.

Instead of garnering empathy from the netizens, she received criticisms instead. Then came Matt Cowan, a brand strategist known for launching the ‘GoFundMe’ campaign whose purpose is to aid people in need. Fortunately, Cowan saw Lenin’s situation and hate cyber bullies, so he started a ‘Tips for Lenin for Standing Up to a San Diego Karen’ fund.

Something about the post against Lenin opened the eyes not only of the Americans but also the people around the world. Donations for the fund poured in from all parts of the world, all the way to Australia.

It was mostly small sums of $10 but with the number of people who wanted to tip Lenin, it reached $100,000. Lenin’s virtual tip jar was led him to be speechless. Cowan decided it’s time to meet up with Lenin in the Miramar Reservior and hand him his tip. Lenin came with his sister and a lawyer. Because the whole thing was reaching different media platforms and was gaining popularity, Lenin had to be sure everything was done right.

So Cowan, along with a colleague – Will Collette, brought the money to him personally and in cash and documented everything on their YouTube channel. In a silver briefcase stacked with $50 bills, they handed Lenin his ‘tip’. Lenin in surprise said, “I don’t know what to say, this is so mind-blowing right now.”

This was definitely going to change his life, and said “a lot of doors are opening up for me because of this. I want to make sure I’m doing the right thing… setting myself up for my life down the road.” After their meeting at the reservoir, he immediately deposited the money in a bank account. It is admirable how this man is handling all these as he says, “I’m not viewing this as something that means I can take a break from life. I’m going to keep going, it’s as if the money never existed.”